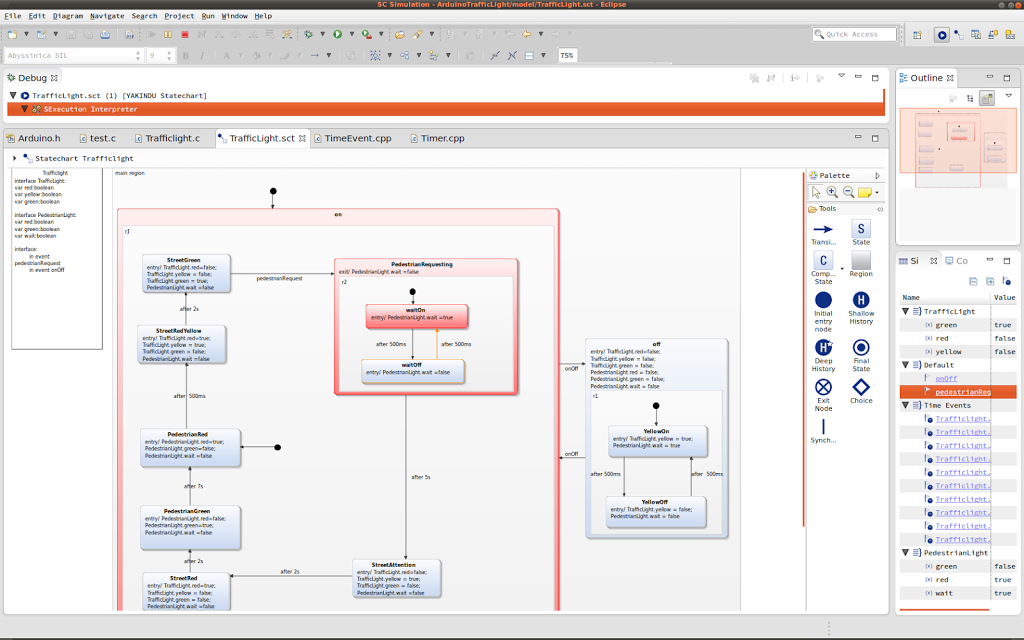 The Yakindu Statechart Tools are predestined to describe the behavior for a system and afterward generate code. The output code could be Java, C or C++. We would like to use the code generator in the context of embedded systems and so we decided to generate code for an Arduino Uno. Therefore we modified our statechart TrafficLight example and implemented some simple glue code to map the hardware timer and the I/O-ports. Furthermore, it was necessary to build a hardware controller that represents the traffic light and so we created a simple controller (it’s available as eagle plan in the appendix and could easily be reconstructed). The example is directly implemented for the AVR ATMEGA328P-PU processor (this one is on the Arduino Uno). It is possible to use the Arduino library to integrate this system, but we would like to support the whole AVR family and so it was the better way to use the AVR library directly. With this solution, the Yakindu SCT could be used on many AVR based processors.

To explore the example project, you have to go through some steps:

Now you are able to use the generated code on the Arduino board. Feel free to modify the statechart model and test the behavior on the hardware platform.

2. Some explaining words to the code

There are three things you have to implement as glue code so that the Arduino works:

The CycleRunner checks periodically for state changes. It uses timer0 to trigger a completion step periodically. An implementation could look like this:

The Timer class is a representation for the hardware timer and it is responsible for initializing the timer and raising TimeEvents. In this example, we are using timer1 from the Arduino to implement the reaction trigger timer. A TimeEvent is triggered when e.g. a transition time expired. There are situations where you have to use several parallel running timers thus it was required to store the time events in an array (see events array in Main.cpp). The Timer checks periodically every 10ms for expired time events and raises them if it’s necessary.

At the moment it is necessary to map the IO ports by yourself. You have to define the port direction and define a method to change the signals. For example, you can map the red traffic light LED like this:

Now you are able to change the LED signal by using the getter method from the state machine interface:

This movie demonstrates the traffic light with the statechart behavior. The designed model is shown in the following image.